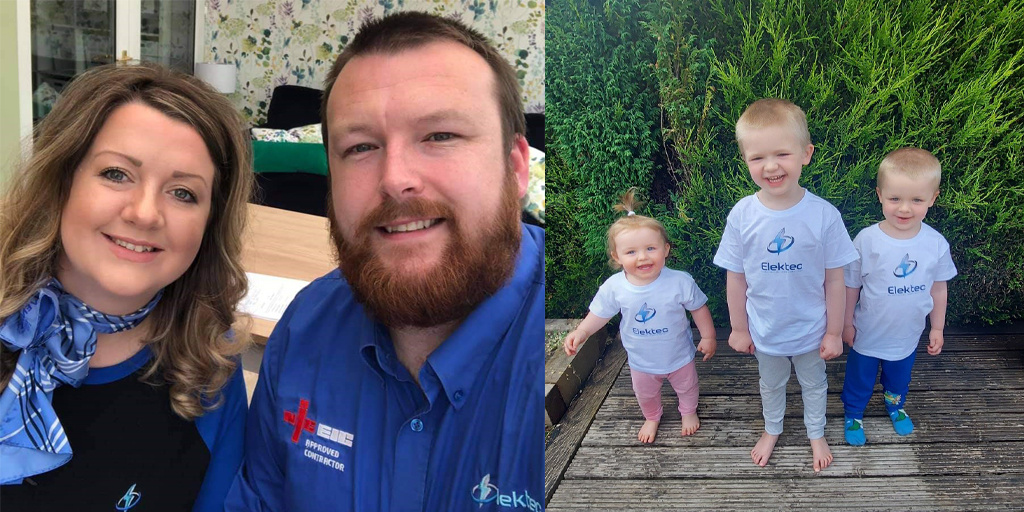 Elektec’s Managing Director, Carl Knowles, has been named a National success story for the Prince Trust. The entire team are extremely proud of him.

Back in 2009, Carl Knowles was working as an electrician when he was made redundant. He found the prospect daunting but was determined to find something new which allowed him to work regular hours. With a £1,500 grant from The Prince’s Trust he was able to set up his own business.

Carl Knowles was working as an electrician at a Blackburn-based company in 2008 when he started dating his now wife, Charlotte. Just a year later, Carl was made redundant aged 22.

Carl found the prospect of unemployment daunting, especially as he had worked at the same company since he left school as an apprentice. He could only find shift work and wanted more regular working hours. Carl decided to explore self-employment and reached out to The Prince’s Trust.

The Trust gave Carl a £1,500 grant to help him set up his own business and connected him to a business mentor, who gave him valuable advice on topics like marketing, finance and setting up a website.

Carl set up a business which offered electrical works to domestic customers. Off the back of its success, in 2017 he took on a new challenge and set up Elektec, an electrical business with industrial and commercial clients in the North West of England. His wife Charlotte now co-owns Elektec and is the Finance & Business Communications Manager.

Charlotte says: “None of this would have been possible without The Prince’s Trust. They gave my husband the confidence, guidance and support he needed to believe in himself and pursue his dreams. Carl and I have three children, and they are Elektec’s biggest fans!”

Despite the challenges of the pandemic, Carl and Charlotte have doubled Elektec’s staff numbers, doubled their turnover, expanded their offices and recruited four apprentices in the past year and a half.

“Helping others is at the heart of our work; Carl and I live by the motto ‘do good and good things will be done to you’. In response to Covid-19, we offered free PAT testing to places of worship, charities and Community Interest Companies throughout Blackburn with Darwen, saving organisations vital funds to spend on those in need.

We regularly offer work experience and apprenticeships at Elektec through local colleges and schools.

Young people are a valuable addition to any organisation and can bring fresh ideas and perspectives to the workplace. It’s very rewarding watching them grow from strength to strength.

Elektec have received a Mayoral Award for “appreciation and recognition of the outstanding contribution made to Blackburn with Darwen”. They have also been recognised as “Lancashire Family Business Heroes” by Lancashire Business View for their work within the local community during the pandemic.